When we talk Skilling Vision 2020 it should not be seen in isolation. All the initiatives by the government today are towards making India a hub of activities. One of which is Make in India. Now to Make in India happen, skilling Indians becomes a priority rather than a choice.

When Hon’ble Prime Minister Narendra Modi launched his government’s ambitious scheme the National Skill Development Mission to train 400 million Indians by 2022, it was a move to support other ambitious targets and schemes. Availability of Skilled manpower for any country is must to support its growth and enrichment of its people.

When our Hon’ble Prime minister Mr. Modi refers to 65 per cent of India’s population which is below the age of 35 years and call upon to make India the world’s human resource capital, it shows his belief in India and its people. Today we are known for IT manpower, tomorrow we may be known for Solar Energy, Technological adaptation in Agriculture, Automobile, Textile and what’s not. Nursing is one such skilling, which has significantly empowered our girls for making a better livelihood.

We are talking about 700 million such youngsters by 2020. This is the first time in the history of humankind such a large population is actively seeking livelihood and employment opportunities. Skill India gives youngsters the most important aspect for their life, employability and respect in society. Skill India will get India the most important asset of this century manpower.

Whatever direction we choose, the numbers are so huge that India will surely be recognised as Human Resource Capital of the world. With establishment of Ministry of Skill Development and Entrepreneurship, the government has made its mandate clear that Skilling Indian has to have greater focus and proper control. With NSDC with experience of establishing Skilling ecosystem, I have no doubt that we all put together will achieve the desired outcome of training 400 million youth.

When you move with such large targets and aspiration of millions of people, continuous evolution should be taken as part of the process rather than focusing on what went wrong. Based on past experiences, things will set to improve.

As a Training Partner and have spent good amount of my life in vocational and skilling sector, I am a great believer of a great movement happening in front of our eyes. The first revolution was of IT, then Mobile and now Skilling. The numbers which are churning out now, were not even totalled up in a decade.

Today wherever I speak, PMKVY, NSDC, MSDE, SSC, most of the people know about it. A decade back, when we met Hon’ble CM Delhi, she asked who are you? What you do? In MPD 2021, we are kept in “COACHING Industry” as the UD ministry was not convinced or not aware about impact of vocational training.

I personally believe, we have arrived and skilling is happening. Now what?

We have to work towards where a Father feels alright if his son/daughter chooses to become an electrician or a plumber or a fitter or a welder or a painter.

The social stigma with so called “Blue Collar Jobs” has to be removed. In fact today, an electrician may be earning better than an engineer. But Engineer is White Collar , Educated whereas Electrician is Blue Collar and Uneducated.

In our days, Engineer – 5-6 streams Medical or regular degrees BA BCOM or BSC were the only options. Today Amity offers more than 130 programs in various streams.

Things are changing. India is moving fast. Under the able mentorship of our Hon’ble Prime Minister, Mr. Rudy and team of NSDC & MSDE, there is no reason to disbelieve the Make In India or Skilled India scheme. Though it takes time. There will be some gaps. There will a hell lot of criticism. But under a strong mentorship, things will move in a right direction.

Let’s wait to see the skill revolutions ahead of us… 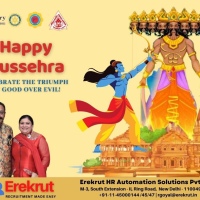